When we’re lost, we check Google Maps. When we need facts, we “google” them. From smartphones to intelligent assistants, Google has become a household name. And there’s a reason Google touches on almost every part of our lives – it makes great things. So why are you still using Yahoo! Mail?

If the answer is, “because I’ve been using it for ages,” then perhaps it’s time to switch to something better. Gmail is probably the most powerful free email client around, with lots of advantages over Yahoo! Mail…

Here’s five of them.

Yahoo! Mail’s infamous 2013 hack resulted in the theft of 3 billion user accounts – the largest hack ever. Yahoo! did apologize (eventually) and has since increased its security. But some would argue Yahoo! should’ve seen it coming.

Google, though not immune to hacking, is normally very quick to address weaknesses. It was the first of the two clients to introduce 2-step verification, for example. They’ve also consistently used the more secure bcrypt password hashing algorithm, which Yahoo! Mail only switched to after the 2013 hack.

While they both offer similar protective features (2-step verification, for example), Google’s reputation for innovation, speed, and patching vulnerabilities puts it miles ahead of Yahoo! Mail.

Google has an enormous international server network. The exact number is confidential, but according to this 2011 report based on energy usage, it’s around 900,000. That number will have increased considerably from 2011, so I’d guess it’s way above a million now.

All that bandwidth and power means your emails are sent lightning fast. It might not be a big advantage, but when you need your email to arrive quickly, Gmail wins hands down.

As a quick test, I sent an email from Gmail to Yahoo! Mail. It was received in my Yahoo Inbox the same minute it was sent: 3.41pm.

I then sent another test email from Yahoo! Mail to Gmail. This time, Gmail didn’t receive the email until five minutes had passed. I know Gmail has stronger spam algorithms, but it’s extremely unlikely that made up the difference. Regardless, I repeated the test with Outlook, and here are the results. 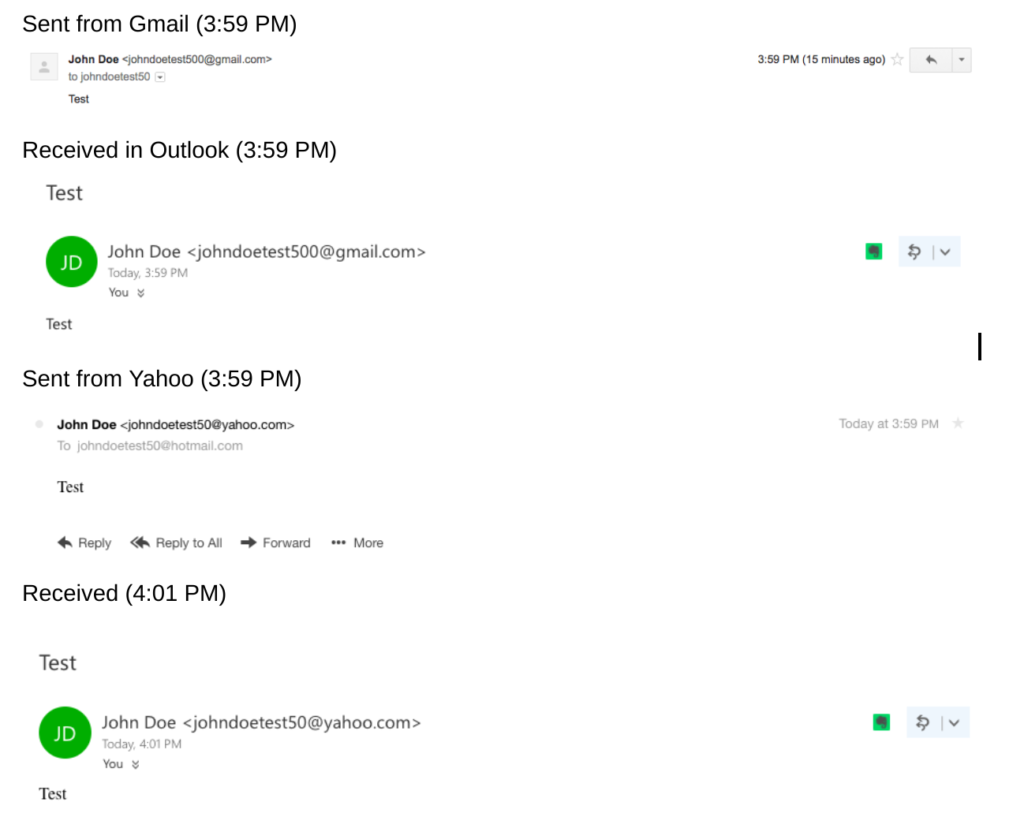 That’s better than the first test, but still two minutes slower. , ow this isn’t a scientific test – I’d need to send thousands of emails at different times to claim a truly accurate pattern – but it does demonstrate just how quick Gmail is.

Reason #3: Gmail has a powerful suite of productivity tools built in

Gmail comes with a pre-installed package of cloud-based tools – many of which are the gold standard of modern office working. Think Calendar, Maps, Documents, Sheets, Drive, Hangouts, YouTube, and more. With everything at your fingertips, you don’t have to log in elsewhere to get the programs you need. You can write, do your accounts, organize your social life, plan your next bike ride, and store precious memories all from within the Gmail app.

Yahoo! Mail, on the other hand, gives you… news? (At least it supports Google Drive.) 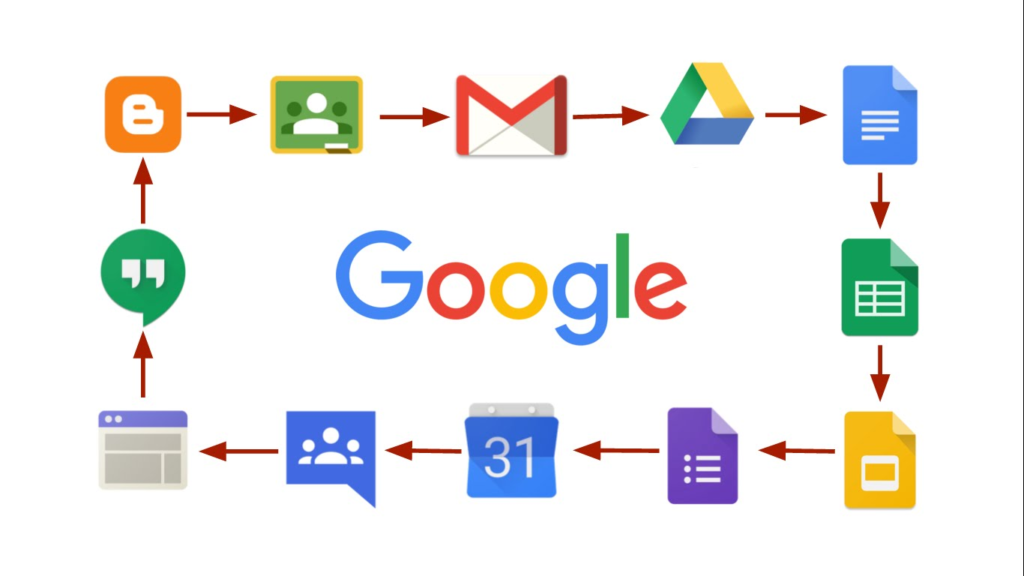 Just take a look at this messy screen. 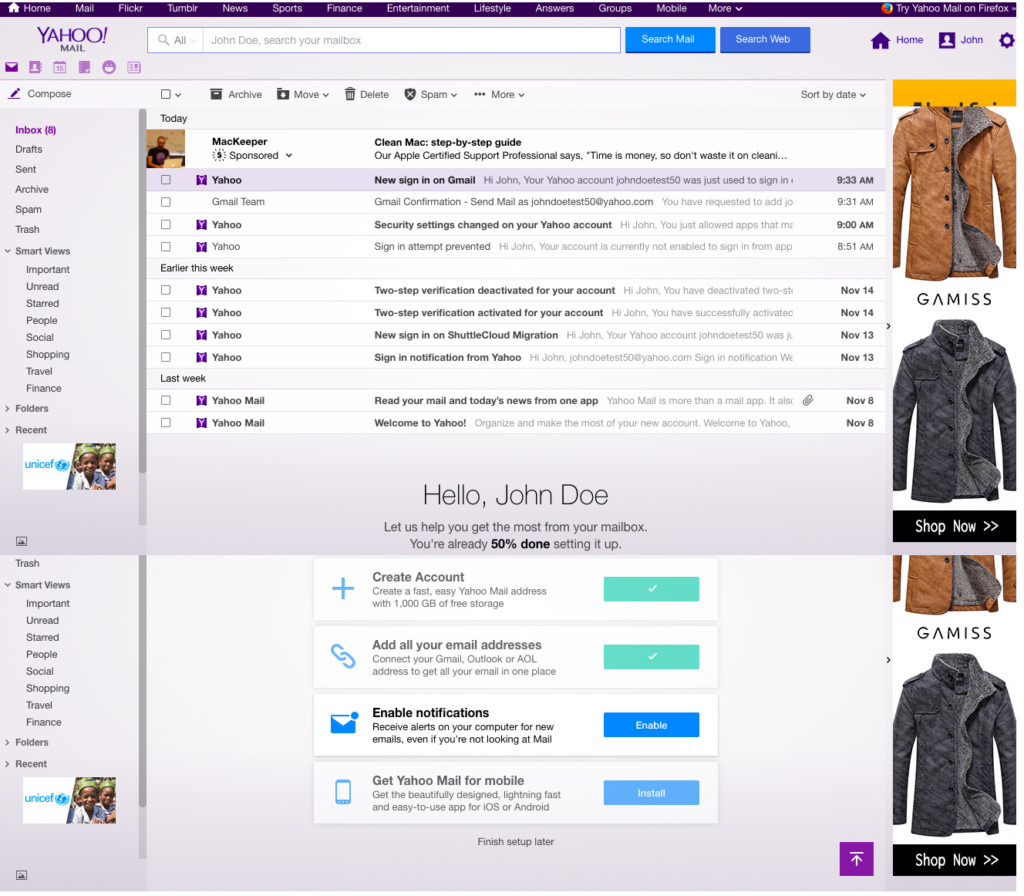 As you can see, Yahoo! Mail’s advertising is quite intrusive. Gmail’s, on the other hand, is fairly subtle. In fact, ads appear as emails under your “Promotions” tab, clearly labelled as such, and only appear in their full form if you click on them. Much nicer and less distracting. 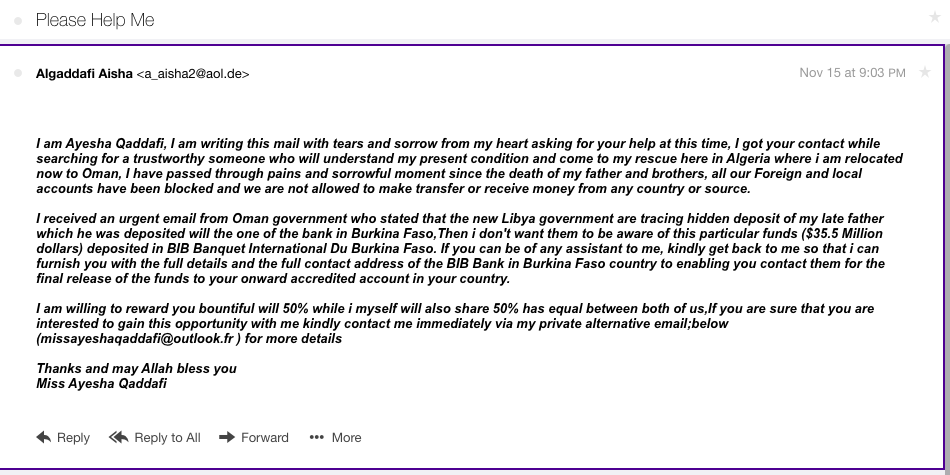 Spam is arguably the most irritating aspect of the internet. No matter how many times you delete it, more keeps coming. All email clients filter spam to a degree, but Gmail’s is the strongest and most effective – catching 99.9% of it.

Gmail uses a combination of user feedback – understanding how you and others react to potential spam – and a machine learning algorithm to successfully delete what you don’t want. This type of neural network programming is gaining traction among other email clients, too, but as Google is one of the leaders in this field, its spam-catching powers are legendary.

In fact, when creating the two test accounts for this article, I received six spam emails in Yahoo! Mail (thankfully they went straight to the Spam folder) – you can read one of them above. But I received nothing in Gmail. Not even in the spam folder.

Gmail isn’t for everybody. The switch from folders to labels might irritate some, and its storage space isn’t as generous as Yahoo! Mail’s. But if you’re sick of spam, want better security, in-built apps, and a cleaner interface – Gmail is the one for you.

3 tips for getting the most out of Yahoo! Mail on iOS