As the older of the two, Yahoo! Mail is a bit like Gmail’s quirky older brother. It’s been around longer, has gone through several style changes, and had had its fair share of embarrassing moments (including a pretty big hack in 2013).

Gmail is younger and fresher, but with a slightly geekier style. Techies love Gmail’s fluid, streamlined interface, its assortment of features, and Google applications built in.

But does that make Gmail better?

Not necessarily. Familiarity, a recently revamped interface, integrated cloud support, and a huge storage allowance make Yahoo! Mail a surprisingly nimble client. And as we all know, experience is a big advantage, and Yahoo! Mail has this in spades.

Assuming most of us want a secure, easy-to-use, and feature-rich email client, let’s see what each has to offer across these three areas.

We don’t want to rehash bad times, but Yahoo! Mail suffered a real doozy back in 2013. A hacker stole the personal information of 3 billion users – every registered Yahoo! account – in the largest data breach ever. Yahoo was a little shady about the exact number at the time but has since ‘fessed up with the truth.

And what has it done since? Well, at the time of the hack, they were using weak MD5 hashed encryption for passwords. They’ve since upgraded to the far more secure Bcrypt algorithm.

Yahoo! also encourages 2-factor authentication, where you use a password and a second form of identification – such as a mobile – to gain entry to your account. All your incoming mail is scanned for viruses, too. 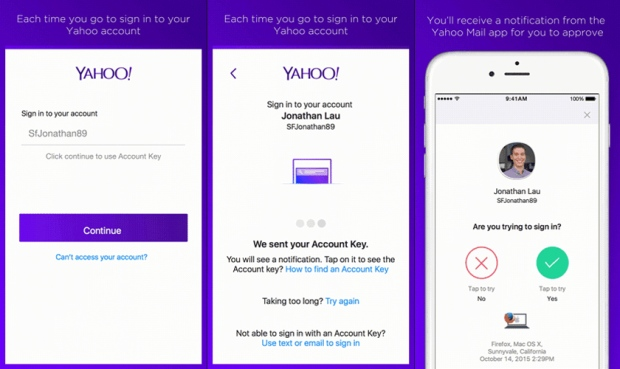 Gmail does all of the above, so they’re fairly evenly matched. In fact, Gmail suffered its own security hiccup when Orin Hafif, a security researcher, discovered a bug in Gmail’s “delegate access” feature that exposed Gmail’s email addresses to theft. This didn’t include passwords, but it would’ve attracted massive phishing scams – something Gmail is regularly fighting.

Both Gmail and Yahoo! Mail are formidable email clients. They’re both free, come with Instant Messaging, and support cloud storage. But they each have elements that outshine the other. For example, Yahoo! Mail gives you 1TB (1,000 GB) of email storage. That’s more than enough for even the most prolific emailers. Gmail only gives 15GB.

On the other hand, Gmail includes powerful productivity applications such as Google Documents, Google Sheets, Google Calendar, and Google Drive. Yahoo! Mail lets you attach files from Google Drive without leaving the app, but it doesn’t integrate the other applications. With Gmail, you get a full suite of tools easily accessible from your Gmail navigation bar, which is convenient for people who like to have everything in one place.

But another point goes to Yahoo! Mail for social media integration. It supports Facebook and Twitter – letting you post directly from the app – while Gmail only lets you access the less popular Google+ (it also supports YouTube natively, but I’ll let you decide whether to count that as social media).

Again, the two are fairly evenly matched when it comes to ease of use. But if you’re used to one or the other, you’re bound to find a few things frustrating.

First, Yahoo! Mail bombards you with ads. While they claim to have reduced them, they’re still quite invasive – taking up most of the right of the screen, and a banner on top.

Gmail’s ads are more discreet, sticking to banners only. This is a much nicer user experience, but there’s a bigger issue that some of you won’t like. To personalize ads, Gmail’s algorithms read your emails. Although Google has said they’ll stop targeting ads in this way, they have no intention to stop reading your emails. So if you don’t want Google’s algorithms knowing your intimate details, perhaps Gmail isn’t for you. Having said that, Yahoo! Mail has reserved the right to do the same.

Another controversial difference between the two is in the way they organize your inbox. Gmail uses labels, while Yahoo! Mail uses folders. For some reason, people tend to prefer folders. Despite Gmail’s labels offering greater functionality, like assigning multiple labels to each email, Yahoo! Mail’s folders seem the more intuitive, and therefore easiest to use.

But Gmail wins on its spam filters thanks to the powerful, data crunching algorithms that drive Google’s search and analytical tools. These keep those Nigerian lotteries at bay, saving you the trouble of deleting them.

And speaking of power, Google’s vast server network does mean your emails get where they need to a little faster. Whether this is important or not depends on you. For most people, Yahoo! Mail is plenty fast enough.

As you can see, both Yahoo! Mail and Gmail have their pluses and minuses. Which you prefer depends mainly on you. Yahoo! Mail might seem like the fun but dorky older brother, it’s been around for ages and has acquired a loyal following who love its folders and generous storage.

But if you’re into tech, love to tinker, and want powerful tools at your fingertips, Gmail is the cool-but-slightly-aloof newer kid on the block you should make friends with.

Either way, you’ve made a great choice.